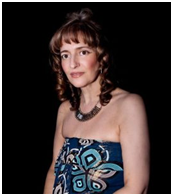 Mikyla Durkan has worked as a theatre practitioner director, actor and producer, both in the UK and abroad, over the previous 11 years and specialises in devising.   She received a 1st class degree from Liverpool Institute for Performing Arts in 2005.   She has recently studied with Dario Fo in Italy, exploring elements of theatre and performance alongside several other practitioners including Mario Pirvano and Jacopo Fo.

She has produced over 100 shows at varied venues in England and Italy including extensive directorial work, design; costume, set, marketing FX design and operation, stage management and devising.